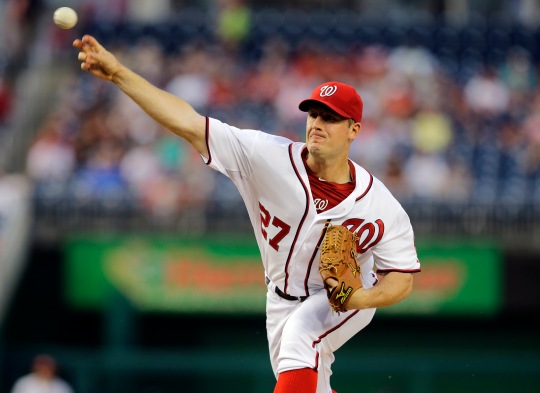 Former Nationals’ manager Matt Williams probably said it best when describing Jordan Zimmermann’s contributions to the Nationals over the past few years.  “The word that comes to mind (to describe Zimmermann) is consistency.  (He’s) reliable (and) durable.  For a starting pitcher that is important and he’s provided the Nationals organization that for a long time,” the former Washington manager said when describing Zimmermann.

In 2016, the Nationals face a season in which they won’t be able to rely on #27’s steadiness and solid production.  From 2011 when Zimmermann first became a full-time member of the rotation through last season, Zimmermann’s 972 innings pitched topped all but 13 Major League pitchers.  His ERA+ of 124 during that time period showed that Zimmermann was not only throwing a great number of innings, he was productive while doing so.

How will the Nationals replace Zimmermann this year?  Fortunately they have two pitchers at the top of the rotation in Max Scherzer and Stephen Strasburg who will likely give the team between 180 and 210 innings pitched each.  In the rotation’s third spot will be Gio Gonzalez. Can Gio regain the form he showed in 2012 (199.1 innings pitched, 21-8 record and 2.85 ER) and 2013 (195.2 innings pitched, 11-8. 3.36 ERA), or will Gonzalez be the on again, off again pitcher he was in 2014 and 2015 when he often struggled to go much further than five innings in his starts?

Young pitchers Joe Ross and Tanner Roark will be counted on to fill in the back end of the rotation, but is it realistic to expect either pitcher to provide 190 or so innings pitched like the Nats would have been able to rely on Zimmermann to throw?

Perhaps the ultimate answer to the problem will be provided by a veteran pitcher the Nats signed to a Minor League deal a few weeks ago.  Soon to be 39 year old Bronson Arroyo is no stranger to throwing lots of innings over the course of a season. From 2005 through 2013, Arroyo threw at least 199 innings in each season.  And while his performance during that time frame wasn’t quite at the level Zimmermann’s was during his five seasons as a Nats’ rotation stalwart, Arroyo wasn’t exactly chopped liver on the hill.   Of course there’s Arroyo’s injury situation to consider as there’s no guarantee that the post-injury version of the righty will be able to put up the type of numbers Arroyo did during his salad days.

With the team’s bullpen somewhat in flux, it will be crucial for the starting staff to be one of the top ones in the National League. Part of that will involve making sure that the pitchers in the bottom spots of the rotation are not five inning pitchers who end up taxing the potentially shaky bullpen.  We’ll see how things sort out once Spring Training begins and we have a better idea of Arroyo’s health, Ross’s development and Roark’s ability to recapture the form he showed as a starter in 2014.