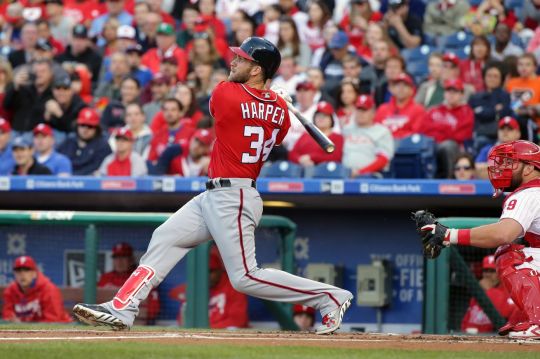 Third star-  Anthony Rendon led the National League in runs scored with 111 in 2014, and many believe that he and fellow top of the order hitter Denard Span were among the main reasons the Nationals achieved success during the National League East winning campaign. So far in 2016 Rendon has scored eight runs, including two last night in the easy win.  The Nats’ third sacker singled and scored in the first inning, and tallied a second run scored in the fifth after he walked ahead of Bryce Harper’s home run.

Second star-  In his 36 starts as a National, Max Scherzer has thrown seven or more innings 22 times.  He did that last night, holding the Phillies to one run in seven solid innings pitched to earn his second win of the year.  The athletic Scherzer helped his own cause as well, driving in two runs for his first RBI since August 24, 2013.

Star of the game-  What more can be said or written about Harper, the 2015 National League MVP who appears on course for an even better season in 2016?  Harper had two hits and three RBI on the game, leaving him with a career 1.049 OPS in games at Philadelphia’s Citizens Bank Park.  Harper continued his trend of strong play in the season’s opening month, boosting his career OPS in April to 1.015 (his best mark for any month).

Valiant in defeat-  As was the case in Friday’s Nats’ rout finding Phillies who played well in the contest was not easy to do, but rugged catcher Cameron Rupp did go 2 for 4 with his first home run of the year in the loss.

Daniel Murphy had a RBI triple in the Nats’ three run first, giving him two triples in 10 games so far this season. Murphy’s career high for triples in a season is four, set in 2009 and matched in 2013. The left-handed swinger has hits in nine of the Nats’ ten games on the year, and leads the National League in batting average (.438) and OPS (1.382).

Chris Heisey tallied the Nats’ final run with a pinch-hit home run in the eighth inning, giving the veteran 12 pinch-hit round trippers on his career.

Gio Gonzalez takes a career 5-3 record with a 2.66 ERA in games at Citizens Bank Park into today’s final game of the three game series.  In his 64.1 innings pitched at the Phillies’ home, Gonzalez has recorded 71 strikeouts.  Phillies’ manager Pete Mackanin seems to have an easy choice regarding his first baseman for today’s game.  Right-handed swinging Phils’ first base option Darrin Ruf is hitting .348 with three homers and nine RBI against Gonzalez, while Ryan Howard is 0-11 with six strikeouts.

The Nats will face right-hander Charlie Morton, who is 1-1 with a 5.23 ERA in his first two starts of 2016.  Jayson Werth (4 for 12, two homers), Harper (3 for 5 with a homer and four RBI) and Wilson Ramos (5-11) have hit Morton hard in their limited opportunities against him, while Ryan Zimmerman has only one hit in 11 at bats against the former Pirate.