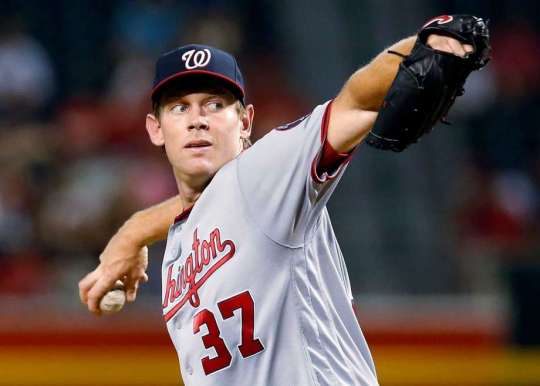 In recent years, trips to Arizona have been very productive. The Nationals continued that trend this week, as sterling efforts by Stephen Strasburg and many others led to a three game sweep of the scuffling Diamondbacks.  The sweep gave Washington a season high seven game lead in the National League East.

A trip to Arizona in the middle of summer means heat and lots of it.  For the Nationals this week, a visit to Chase Field was just what the doctor ordered to get their bats heated up.

The Nationals scored at will in the three game set, outscoring Arizona by a 32-8 margin to finish their three city road swing with 6-3 record.  Since 2012, Washington is 11-4 at Chase Field and has outscored the Diamondbacks by a 101-58 margin.

Some items from note following the series include the following:

Strasburg continued his sterling 2016 season with six innings of three hit, one run allowed pitching in Washington’s 14-1 win on Monday night.  On the year, Strasburg’s .980 WHIP puts him on pace to shatter his career best of 1.049 set in 2013.  Strasburg also starred at the plate, going 3-4. It was the second three hit game of Strasburg’s career, and marked the sixth time a Nats’ hurler has had three knocks in a game.  Livan Hernandez, who had three hit games in both 2005 and 2006, is the only Nats’ pitcher besides Strasburg to do so multiple times.

Few pitchers are as dominant as Scherzer when he is on his game, and he was for most of his appearance on Wednesday.  The Nats’ All-Star struck out 11 in eight innings pitched, marking the ninth time he’s had 10 or more punch outs in a game in the 2016.  He’s only two games short of the Nats’ record of 11 double digit strikeout games, a mark he set in 2015.

Leadoff man Trea Turner flashed his talent in the series, getting five hits in the three game set. Among those hits was Turner’s fourth triple of the year and a mammoth 450 foot home run in Wednesday’s series finale. The homer was the second longest for the Nats’ in 2016, trailing only Wilson Ramos’ 455 moon shot against San Diego in the final game of Washington’s last home stand.

Another National who was hot at the plate in the series was Anthony Rendon, who went 5 for 13 with five runs scored, two doubles and four RBI. Rendon’s 2016 OPS is now a season high .784.

Is the first week of August too early to be talking about a playoff preview?  It may be with a third of the season left to go, but the Nationals and this weekend’s opponent San Francisco could meet again in October when the post-season begins.

Gio Gonzalez takes the mound for the Nats in the opener of the three game set. Gonzalez is 2-2 with a 2.70 ERA in his last five starts, but has not gone seven or more innings in a game since June 9th.  Over his last nine starts, Gonzalez has averaged 5.5 innings pitched.

The Giants counter with Jeff Samardzija, who went 1-2 with a 5.64 ERA in his July appearances.  The second inning has been particularly problematic for the tall righthander in 2016, as he’s allowed opponents to hit .333 and post a .921 OPS in that frame.