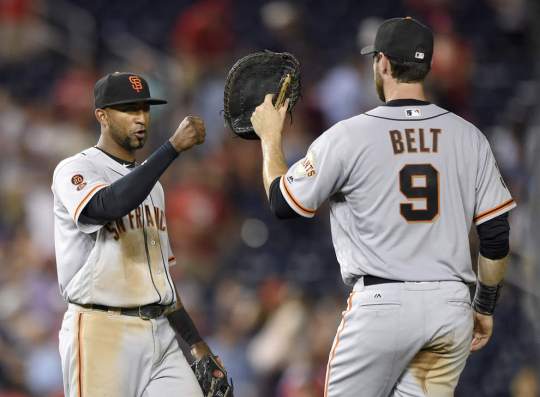 San Francisco’s Eduardo Nunez and Brandon Belt celebrate the Giants’ 7-1 win over the Nationals on Saturday evening at Nationals Park.

Third Star-  It is well established that San Francisco’s Buster Posey is one of the best all-around players in the National League. Posey’s skills were on display on Saturday night at Nationals Park as he went 2 for 3 with two RBI to aid the Giants’ seven run attack. Posey’s 2016 WAR to date of 3.3 is tops among Major League catchers, with the Nats’  Wilson Ramos (2.9), Jonathan Lucroy of Texas (2.8) and Kansas City’s Salvador Perez (2.7) next.

Second Star-  In years past, Giants’ Saturday starter Matt Cain was an all-star. These days the gutty veteran is trying to work his way back to that status, but don’t tell the Nationals that he’s lost his game. Cain defeated the Nats for the second time in a week, shutting them out over five innings pitched to earn his fourth win in ten decisions on the year.

Star of the Game-  Eduardo Nunez put on a show on Saturday night, going 4 for 5, scoring three runs and picking up three extra-base hits (two triples and a double) in San Francisco’s win.   Nunez’s two three-baggers marked only the fifth time a Nats’ opponent has had multiple triples in a game.  It was the first such game since September 7th of 2012, when the Marlins’ Jose Reyes tripled twice in Miami’s 9-7 win at Nationals Park.  Nunez also contributed a fine defensive play, as he corralled a hot shot of off the bat of Washington’s Jayson Werth in the fourth inning to begin the turning of a key double play that helped keep Washington scoreless.

Valiant in Defeat-  Line drives were coming off the bat of Washington’s Wilson Ramos all night long, as the hot hitting catcher went 3 for 4 in his team’s defeat.  Ramos also scored the Nats’ only run on the night.

Stephen Strasburg only lasted 4.2 innings on the night, marking his shortest outing of his All-Star year.  He surrendered a season high four extra base hits in the game, but did strike out eight to mark the 12th time he’s had eight or more strikeouts in a game this season. Strasburg also had Washington’s only extra-base hit on the night, picking up a fourth inning double. The double was Strasburg’s first since July 1st of 2014.

The Nats and Giants have played six times so far in 2016, with each team winning three times.  The tie will be broken on Sunday, as Giants’ ace Madison Bumgarner takes on Washington’s underrated 11 game winner Tanner Roark in the rubber game of the series.