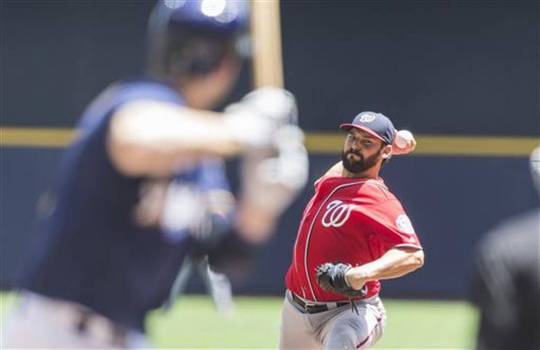 A 3-7 road trip is nothing to write home about, especially when seven of the games were played against sub-par San Diego and Milwaukee teams.  However the difficult trip did have a happy ending, as Tanner Roark’s pitching and power from unusual sources led Washington to a 3-2 victory and a three game lead in the National League East heading into a showdown series against the Mets at Nationals Park.

Third Star-   Reserve first baseman/outfielder Clint Robinson doesn’t have flashy numbers, but he passes the eye test when looking for good at bats from a bench player.  His two run homer to right field off of Milwaukee reliever Michael Blazek in the eighth inning gave Washington a 3-0 lead, a cushion they’d need when the bullpen surrendered runs in both the eighth and ninth innings.

Second Star-   No one doubts Nats’ backup catcher Jose Lobaton’s ability as a defensive player and pitch framer, but he’s not known as much of an offensive threat. Today Lobaton excelled with both the glove and the bat, as his home run to left-center broke a scoreless tie in the seventh inning and gave Washington a lead it would not lose.  The homer was the first of the year for Lobaton, and the first he’s hit since June 28, 2015 when he hit a round-tripper at Citizens Bank Park against the Phillies.

Star of the Game-   Starting a day earlier than expected due to Stephen Strasburg’s injury, Tanner Roark threw seven innings of scoreless ball to lead Washington to victory.  Roark has five games this season in which he’s thrown at least seven innings and allowed no runs, tying him with Chicago’s Jake Arrieta for the National League lead in that category.  Roark is now 7-5 with a sterling 2.96 ERA on the year.

Valiant in Defeat-  Ryan Braun, Jonathan Lucroy and Chris Carter had two hits a piece for Milwaukee, but the big blow for the home team was a two-out, ninth inning mammoth pinch-hit home run by Martin Maldonado that kept the Brewers’ hopes alive. The home run was the backup backstop’s second of the season.

Washington’s Shawn Kelley earned his third save of the year,  working 1.1 innings, striking out three and stranding the tying run on third base to end the game. In 9.2 innings pitched in June, the righthanded reliever has 16 strikeouts.

Prior to the home runs by Lobaton and Robinson, it looked like another “missed it by that much” day for the Nats in terms of the long ball.  In the fifth inning with the bases loaded, Bryce Harper narrowly missed hitting a grand slam home run as Milwaukee’s Kirk Nieuwenhuis grabbed Harper’s blast to the deepest part of center to keep the game scoreless.

Joe Ross takes the hill tomorrow night at Nationals Park against the Mets. In his career at the home of the Nationals, the talented youngster is 6-4 with a 2.92 ERA and has held opponents to a paltry .596 OPS.

Ross’s opponent on the mound will be New York’s talented and towering righty Noah Sydergaard, who is 8-2 with a 2.08 ERA and 10.9 strikeouts per nine innings pitched this year.  Anthony Rendon (4-10 with a double and a homer) has fared well against Syndergaard in the past, while Danny Espinosa (0-6, four strikeouts) has not.